The Exhibitor, September 20, 1939:
"That Baltimore might have its branches of the world's two most popular forms of entertainment, radio and motion pictures, combined under one roof, and in a setting conducive to both, Morris A. Mechanic, Baltimore exhibitor, retained Armand Carroll, Philadelphia architect to design a suitable structure." 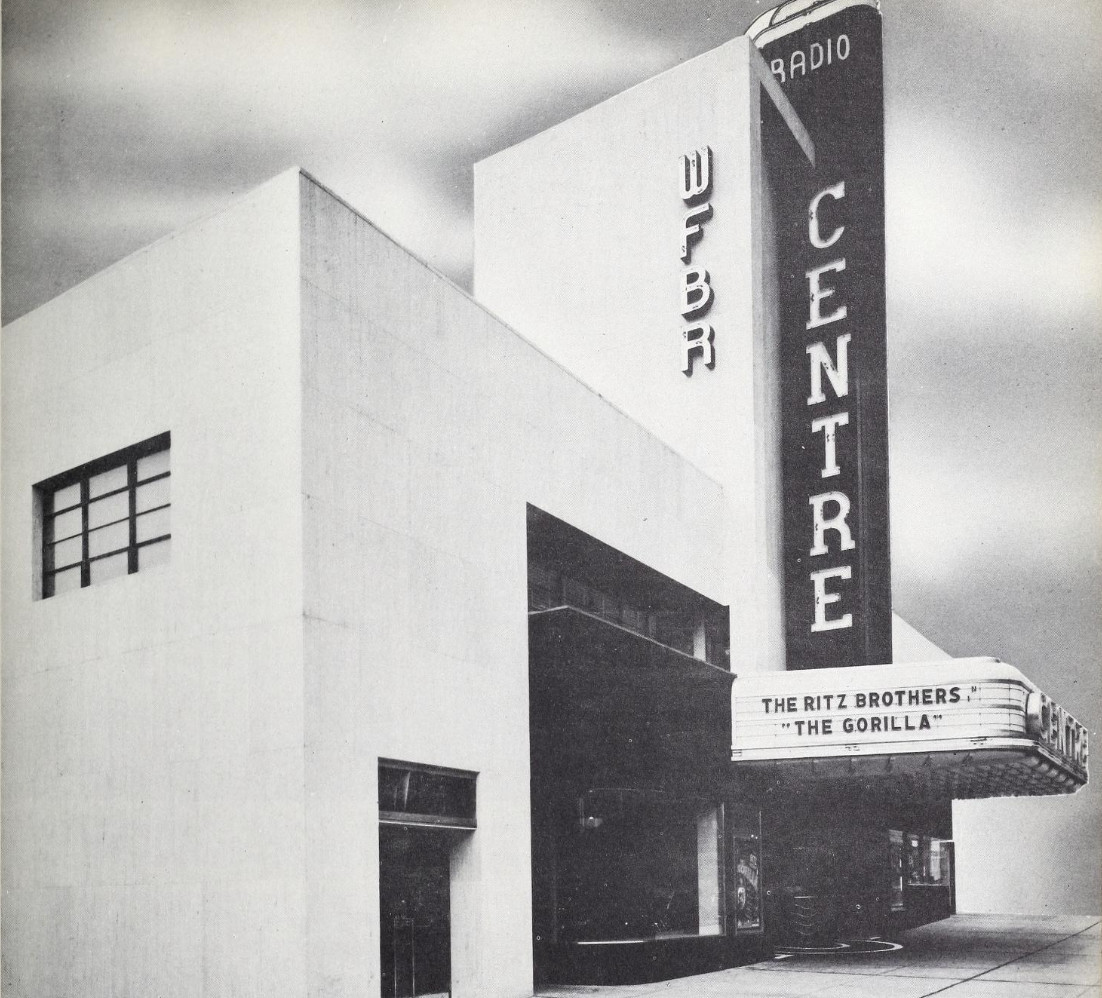 "The front with its majestic upright sign is indeed a credit to its designer. Travertine and black Virginia stone were used here with striking results. The upright sign and marquee are of porcelain enamel constructed with stainless steel trim."
Station WFBR

"Radio station WFBR, which occupies the second floor of the theatre building, is said to be the most  modern station in the country. Its six studios include exceptional facilities for accommodating large audiences for local shows."
Centre Theatre 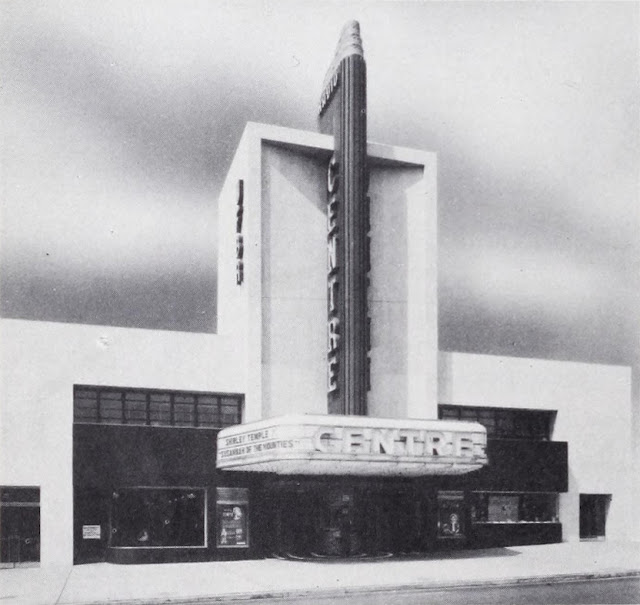 "The Facade as it appears from a more central point. From this view is gained a better perspective of the overall design. The black stone portion which extends out from the face of the building allows a space directly in front of the radio station windows for potted shrubbery." 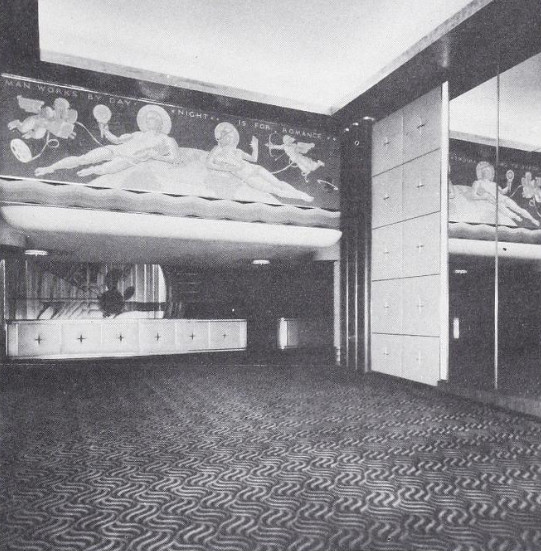 "The inside lobby which leads into the standee room is without furnishings. Its most prominent feature is the large mural done on green linoleum. This mural is indirectly lighted from a trough immediately behind." 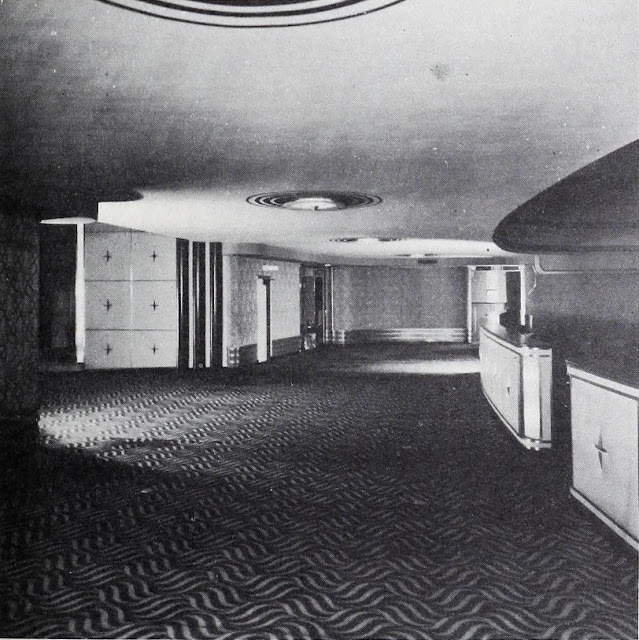 "The standee room is well carpeted in a standard Crestwood pattern of black and gold. The standee railing has been covered with padded natural pigskin leather ornamented with bronze stars, and molding.  Aisles are of luminous glass and are back lighted ." 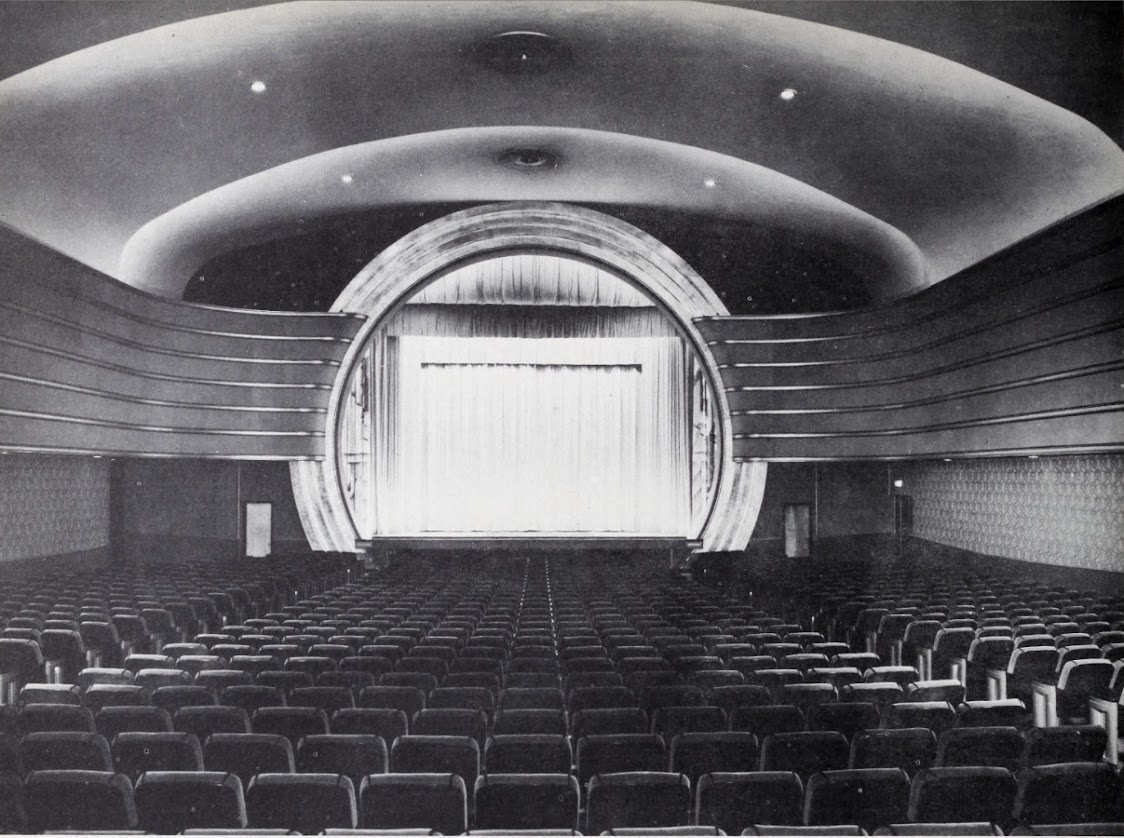 "The proscenium design is a definite departure from the usual formula. A perfect circle, it is broken only by the  upper  side walls of asbestos transite, which flows gracefully into it. The lower portion of the walls have been covered with green and gold damask and have grained walnut plywood as a wainscot. The curved ceiling, with a number of small direct lighting fixtures supplemented by coves for indirect illumination, is of hard white plaster and painted in a shade of ecru."
Centre Theatre
WFBR
The Gorilla
Since 1997 theatre historian,  Cezar Del Valle, has conducted a popular series of  theatre talks and walks, available for  historical societies, libraries, senior centers, etc.
Del Valle is the author of the Brooklyn Theatre Index, a three-volume history of borough theatres.
The first two chosen 2010 OUTSTANDING BOOK OF THE YEAR by the Theatre Historical Society. Final volume published in September 2014.
Currently seeking funding for “Editing & Formatting” the first three volumes of the Brooklyn Theatre Index, 3rd Edition
AboutMe
Goodreads

Posted by Cezar Del Valle at 12:03 PM No comments:

"In recent years the motion picture industry has seen the advent of newsreel theatres. These houses screen the industry's weekly newsreel output as the feature attraction and fill in with sufficient short subjects of merit to make up a definite program."

"Pictured here is just such a house designed by Shaw, Naess and Murphy for the Newsreel Theatres, Inc., Chicago." 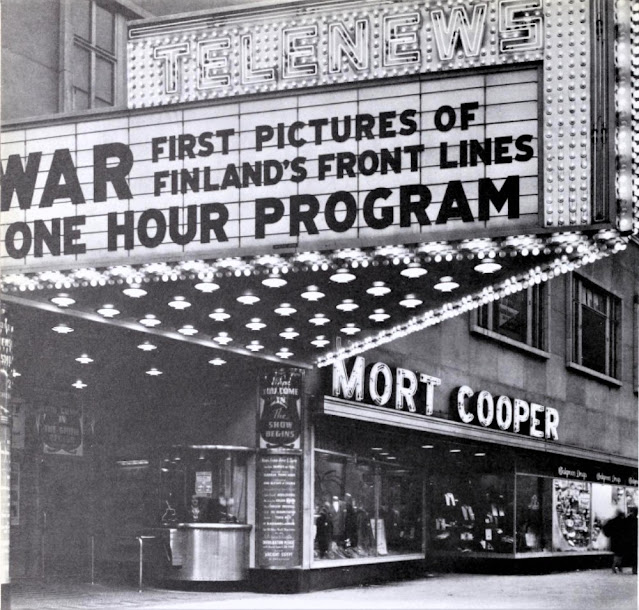 "The exterior of this newsreel house is of a design typical of that current for this type of theatre. A huge triangular marquee extends well out and across the sidewalk, gaining much attention over the neighboring stores. Prominent in this view is the stainless steel boxoffice with its automatic turnstile." 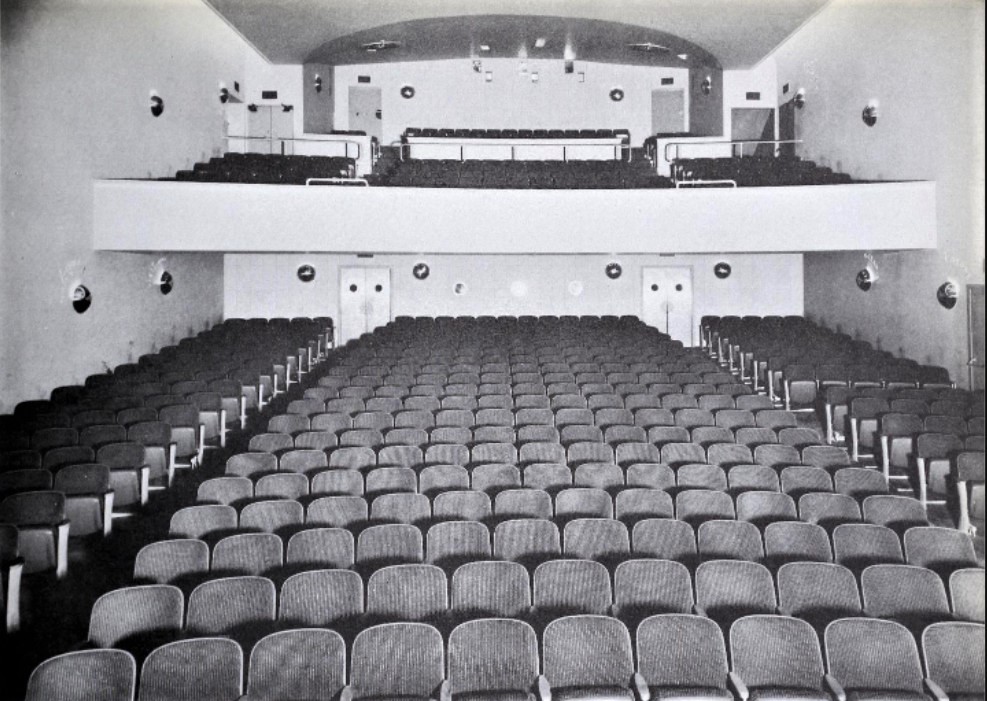 "The auditorium is small as is usual with most newsreel houses. A balcony with a capacity of approximately 150  capably handles  the first floor overflow. Simple in its decoration the sidewalls of this room are of blue green painted plaster. The rear wall is acoustically treated and in the natural color of the material. The lighting fixtures are brass and were designed especially for this house." 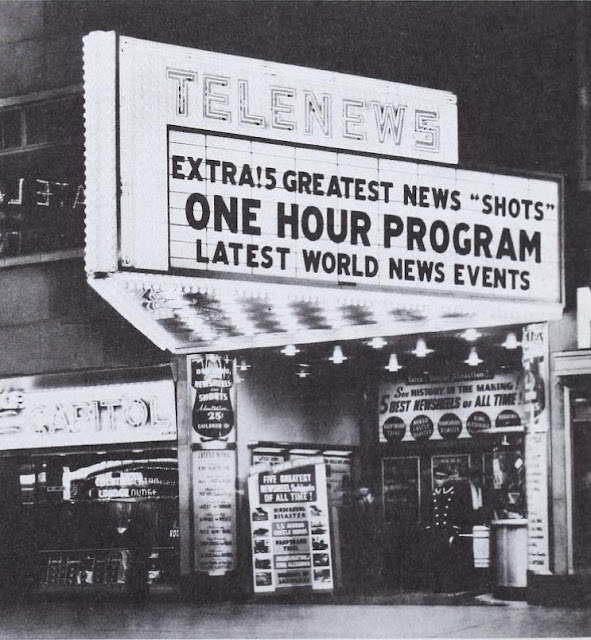 "The exterior at night fully illuminated shows the attractiveness of the signwork
and the extent of the exploitation necessary for this type of theatre."

Posted by Cezar Del Valle at 10:33 AM No comments:

But even the Roxy's elaborate plans were inadequate when the 20th Century Fox hit 'Suez' in its world premier run, blasted 'In Old Chicago' sensational records."

"The waiting line a half-hour before the New York Roxy doors opened. 3,089 people stretched along 50th Street a quarter of a mile." 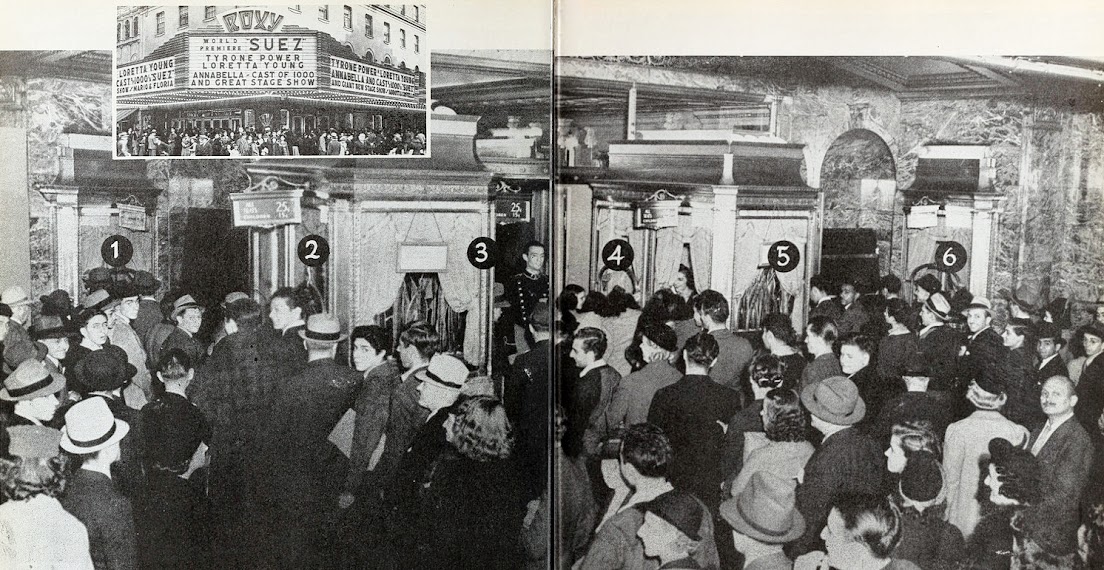 "Usually four boxoffices are sufficient for the biggest attractions. But even the Roxy's full battery of six boxoffices (largest in the world) were swamped." 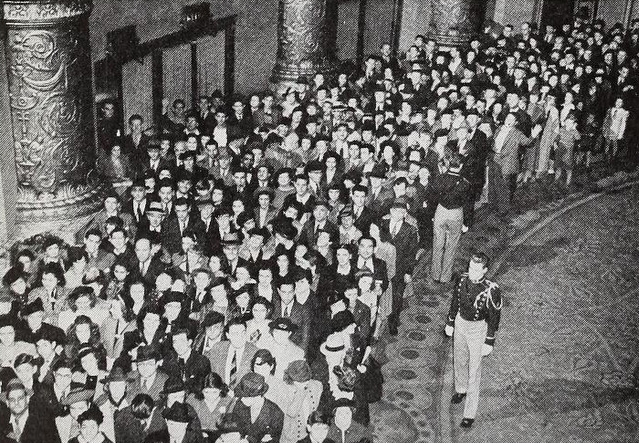 "Every one of the Roxy's 5,886 seats is filled and more than 500, under Capt. Walter  Darrah's watchful eye wait in the Rotunda." 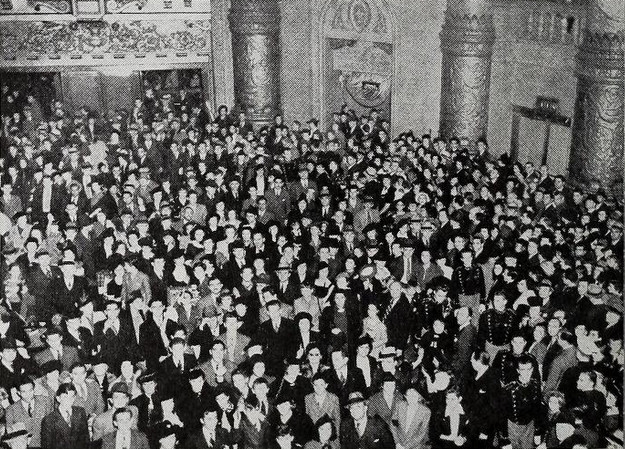 Hundreds stand in back of orchestra hopefully waiting for a seat. They are lucky. This, their fifth wait, is their last."

Posted by Cezar Del Valle at 9:04 AM No comments:

The Metro to Reopen on Broadway

West Side Rag, March 20, 2022:
"Metro Theatre will be a 'community entertainment center' with multiple restaurant-theatres and much more."

Newspaper articles refer to it as an art deco cinema but the interior was demolished in 2006 to prepare the space for retail use.

David Dunlap, New York Times, November 14, 2007:
"the inside, visible to passers-by on a recent afternoon, has been gutted. Gone are seats and plaster and curtains and screen. Gone is a golden ceiling molding with a chain of floral bouquets. Gone are the sylph-filled niches. Gone is grille work that sprouted like corn stalks."

The Metro, 2626 Broadway, opened in 1933 as the Midtown, part of Ochs circuit of theatres.

The New York State Exhibitor, June 25, 1933:
"the Ochs circuit signalized the opening of its new Midtown theatre by covering the vicinity of the new house with a twelve-color display done in ADC's multi-color process."

"The façade- its terra cotta and aluminum pattern by day and its illuminate effect with floods and  tubes at night."

"The Midtown is of the stadium type, with the 590 seats distributed equally between the stadium section and forward area, each of which contains 14 rows." 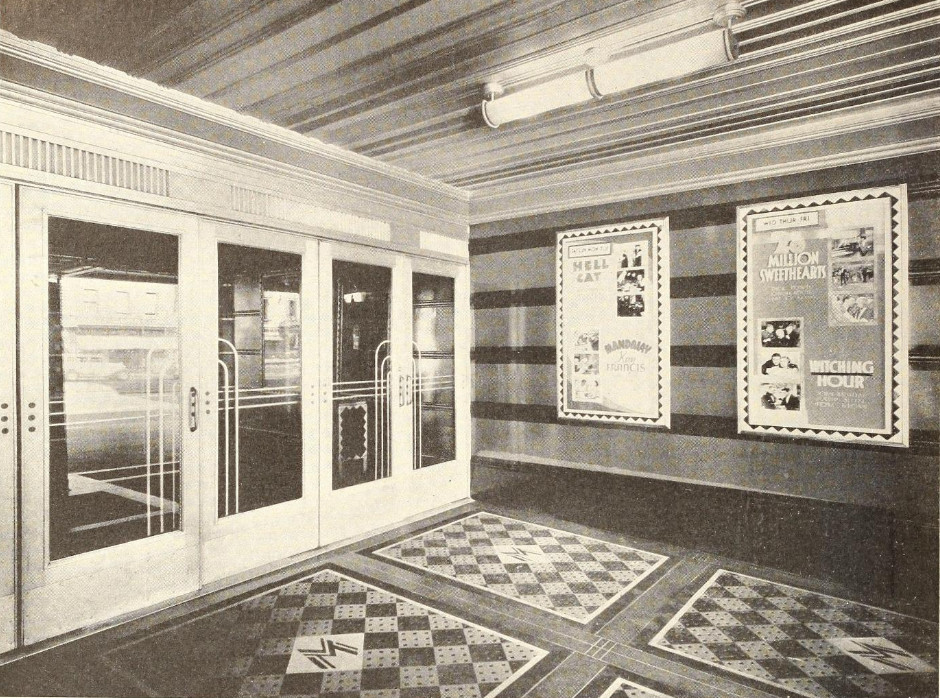 Midtown "is one of the newest theatres which afford suggestions for the modernization of older theatres.

"In the lobby, the walls are covered with Formica sheets in horizontal bands of rich red inlaid with 2 inch strips of black at the edges."

Posted by Cezar Del Valle at 2:55 PM No comments: 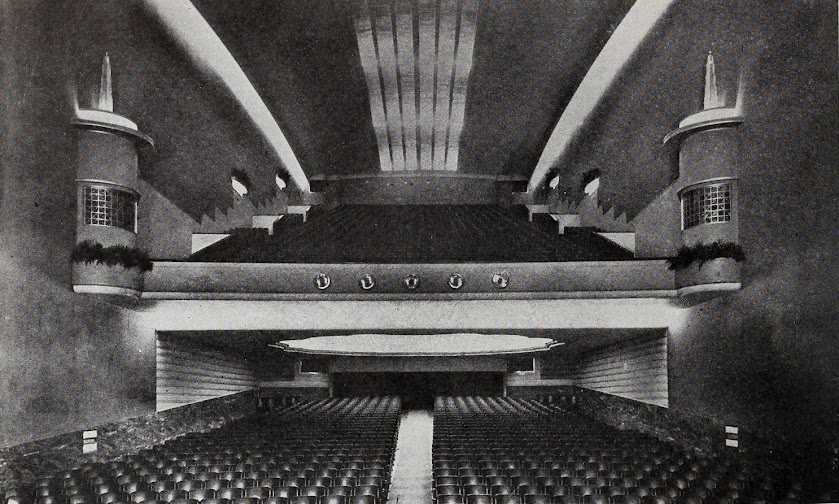 "The auditorium ceiling gives the effect of being suspended, owing to the coves which separate it from the walls, creating a cornice of light."
"Running down the center of ceiling, coves on either side of reflecting bands throw them in relief."
"The auditorium is further distinguished by having 950 of its 1,800 seats in the balcony." 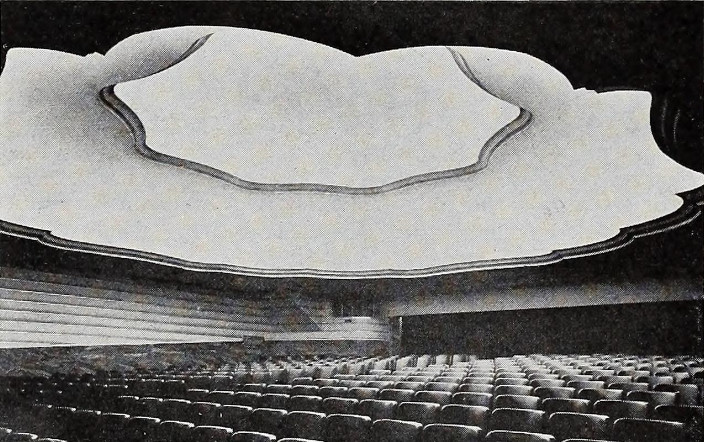 "The soffit of  balcony opens up into a great flower petal bathed with light from coves at the escalloped modeled rim." 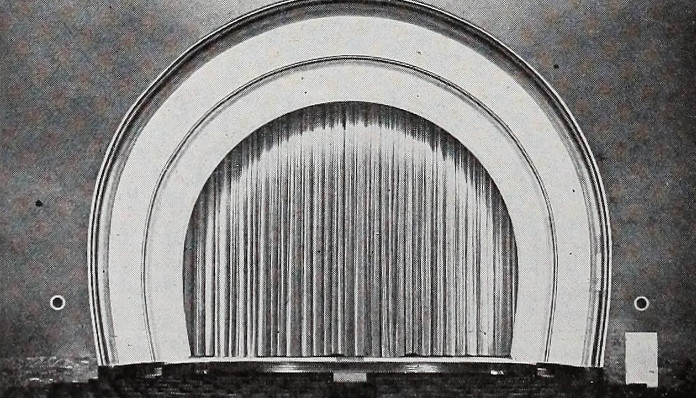 "The proscenium arch is ringed with lights from sources concealed behind moulding borders"
"The Cine Presidente  Roca is owned and operated by Clemente Lococo, who heads one of the largest circuits operating in the Argentine Republic. The architect was Alberto Bourdon."
Cine Presidente  Roca
Since 1997 theatre historian,  Cezar Del Valle, has conducted a popular series of  theatre talks and walks, available for  historical societies, libraries, senior centers, etc.
Del Valle is the author of the Brooklyn Theatre Index, a three-volume history of borough theatres.
The first two chosen 2010 OUTSTANDING BOOK OF THE YEAR by the Theatre Historical Society. Final volume published in September 2014.
Currently seeking funding for “Editing & Formatting” the first three volumes of the Brooklyn Theatre Index, 3rd Edition
AboutMe
Goodreads
Posted by Cezar Del Valle at 2:19 PM No comments: 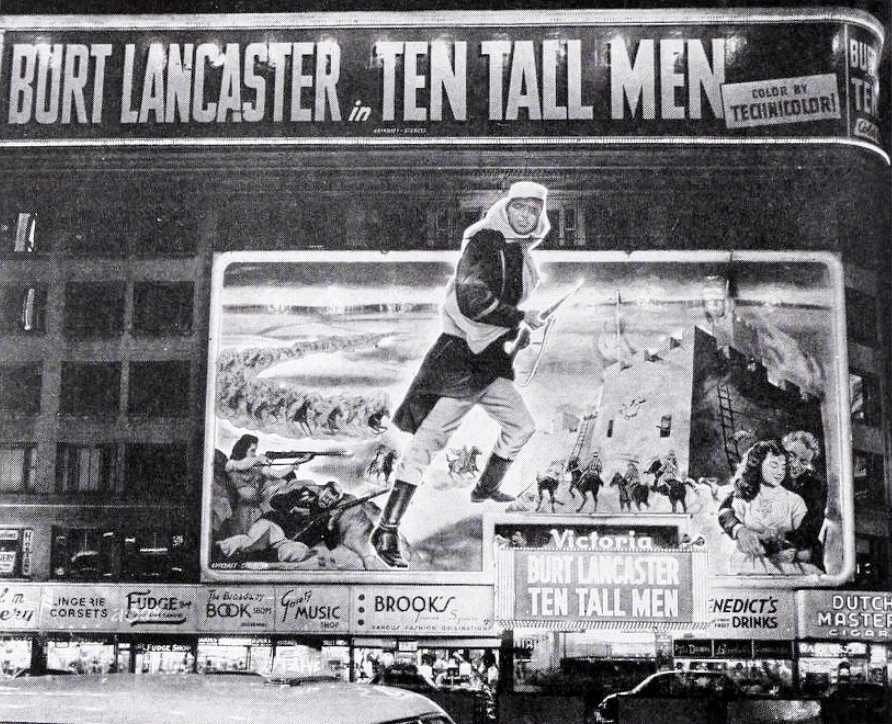 "Really, the tallest and most spectacular figure ever built on Broadway. The principal character in this great display for 'Ten Tall Men' at the Victoria theatre, is sixty-five feet high, and surrounded with colorful--and expensive--art work." 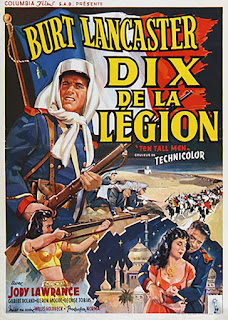 Posted by Cezar Del Valle at 2:27 PM No comments: 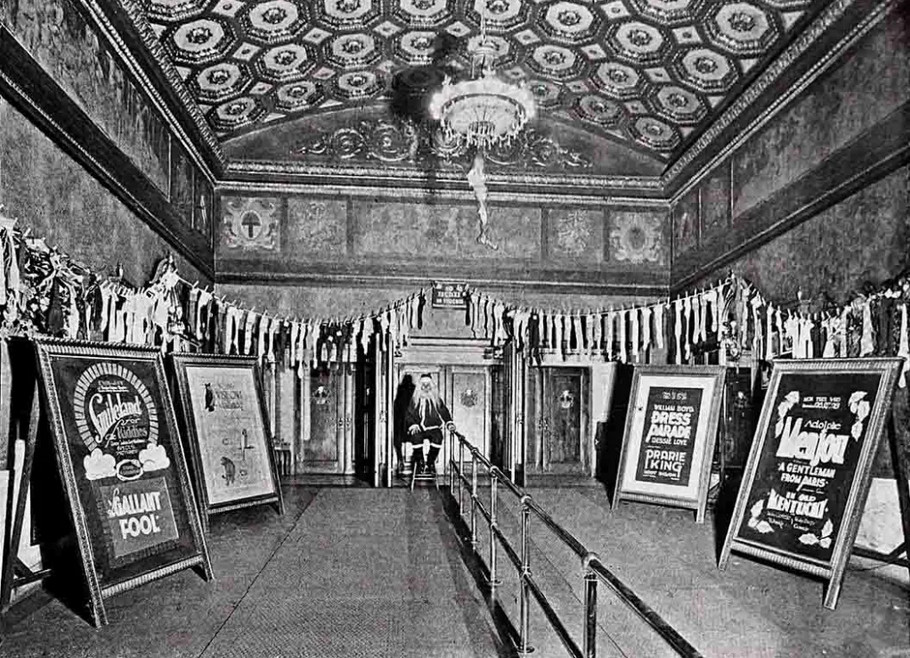 “Christmas time at the Embassy theatre is the time for hanging up stockings and the kiddies of Orange, East Orange, West Orange and other suburbs bring their stockings to the Embassy, where they are hung in the lobby.

[Richard R.] Reilly [manager] inaugurated his idea as early as November 26. On that day, at the Saturday matinee performance, he told the kiddies of the coming of Santa Claus to the Embassy and he emphasized the fact  the following Saturday. The children came and brought their stockings, which were left with ushers  who gave the children a number and took their names.

“The stockings were then hung in the lobby with the number of the child placed on each stocking so that attending kiddies always could pick out their stocking, show them to companions and to parents.

“Every Saturday meant a holiday for the children. As they came into the theatre they saw Santa Claus filling up various stockings. This until Saturday, December 24, when the last stocking was filled. So great was the response from the children that on Saturday, December 3, the day set for the bringing of the stockings, there were 2,397 kiddies at the matinee. The number of stockings brought during the period was 1,227.

“The sight in the Embassy lobby and foyer was a picturesque one. The stockings, filled with presents, were returned to the kiddies on Saturday, December 24, which coincided nicely with Christmas Eve., Reilly placed in several of the stockings season passes to the Embassy.

“He further ingratiated himself with the children by having the children who received season passes report to him every Saturday matinee before the theatre was opened.

“The manager took these children into his office, showed them the activities going on before a theatre is opened to the public, got their reactions to pictures and did everything to make them happy.”

Posted by Cezar Del Valle at 11:28 AM No comments: